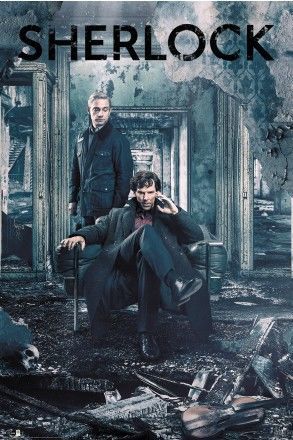 Sherlock is one of the best detective and thriller series ever made. The series is a modern take on Arthur Conan Doyle’s Sherlock Holmes detective stories. This series has everything, action, mystery, crime, and romance. Benedict Cumberbatch is excellent as Sherlock: smart, arrogant and very good at what he does. And Martin Freeman is brilliant as his assistant Dr. Watson. This is my personal favorite among this list of Top 10 thriller web series.

Dexter is about a blood spatter analyst who is also a vigilante serial killer who only kills murderers. He only kills people who are beyond the law, and the police have no evidence against him. Jennifer Carpenter who plays his sister is amazing. Dexter has an inner monologue that is evident throughout the series, and he narrates every episode. This is one of the best, most interesting and intense series ever made.

This is, without doubt, one of the most intense thrillers ever made. A group of people decide to rob a bank. The twist is that the robbery goes wrong. This series is brilliant because no character is good or bad. This heist story continues to get more intense and ends up taking eight episodes. This is a non-stop thrill ride that will have you on the edge of your seat.

Peaky blinders is set in England, in 1920s Birmingham. This series is about a gang that makes a living out of stealing cars, betting on horses and running protection rackets. Cillian Murphy and his gang are intimidating and thrilling to watch. There are many interesting characters, and the series does a great job of creating an intense and thrilling atmosphere. ## breaking bad This is the best tv series ever made. The series is about a high school chemistry teacher who decides to make meth to provide for his family. Bryan Cranston as Walter White and Aaron Paul as Jesse Pinkman are excellent in their roles. This is a dark, intense and gripping story that is well written.

Luther is a British detective series about a detective whose methods are sometimes questionable. This is another excellent detective series with a good story. Idris Elba is good as John Luther and you find yourself rooting for him despite his methods.

Altered carbon is a sci-fi thriller set in the future. This series is about a man who is brought back to life to solve a murder. The series has an interesting story and a good cast. The cinematography and special effects in this series are also very good. It has a futuristic story with great action, twists and turns.

Dark is a German science fiction thriller web television series created by Baran bo Odar and Jantje Friese. The first season, consisting of ten episodes, premiered on 1 December 2017, on Netflix.
The series is set in the fictional town of Winden, in the year 2019. The town is plagued by the recent disappearance of two young children.

Prison break is a hugely popular web series that has been thrilling audiences for years. The show follows the story of Michael Scofield, a man who is determined to break his brother out of prison.

Each season of the show is full of twists and turns, and the finale of the most recent season was no exception. Michael and his team finally succeeded in breaking his brother out of prison, but not without facing some serious challenges along the way.

The prison break web series is a great example of how a well-written and executed show can keep audiences hooked for years. The characters are compelling, the storylines are thrilling, and the stakes are always high. If you’re looking for a new show to get into, prison break is definitely worth checking out.

As the residents of Winden search for answers, they are faced with their own dark secrets and desires. The series explores the interconnectedness of all life, and how the past, present, and future are all connected.

Dark is a gripping and suspenseful series that will keep you guessing until the very end. If you’re looking for a new show to binge-watch, Dark is definitely worth checking out.

Dark has now three season and you will love this show for sure. Don’t miss this if you are a thriller lover.

If you haven’t seen Westworld yet, you’re missing out on one of the most intriguing, complicated and just plain cool TV shows out there.

The series, set in a futuristic theme park where guests can experience what it’s like to live in the wild west, is full of twists and turns that will keep you guessing. And the acting is top-notch, with Anthony Hopkins particularly stand-out as the park’s creator, Dr. Ford.

If you’re looking for a smart, gripping show to get into, Westworld is definitely one to watch.

Note:- I have given the rankings according to my personal likings but all the mentioned web series are great however, I have also mentioned IMBD ratings for those who believe in ratings , But if you ask me I am not a big fan of ratings. Anyways, get your popcorns ready and have a good time watching these shows. 😉

No comments to show.